Here is the link to Konstantin’s blog post on a magical (non-existent) collaborative development tool: http://people.kernel.org/monsieuricon/patches-carved-into-developer-sigchains

Secure Scuttlebutt came up a lot too: http://ssbc.github.io/scuttlebutt-protocol-guide/

Potential Solutions for the Nine Problems of Distributed Systems 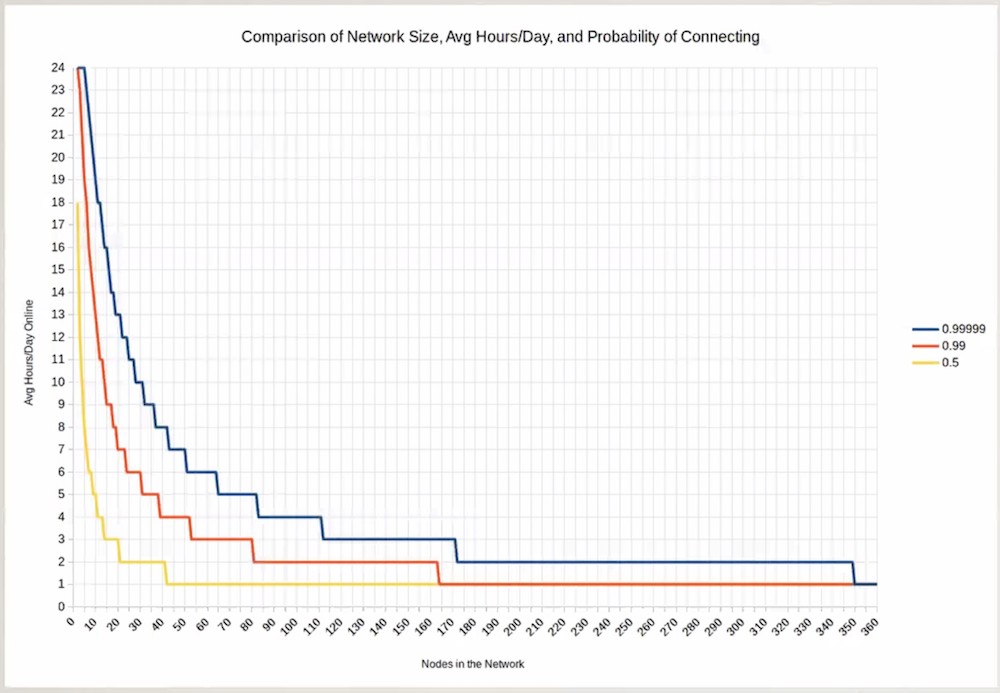 Dave’s vision to build an ideal developer tool from scratch. What would it need?

Dave’s 5am Project Summary Statement I suspect a fully user sovereign, fully decentralized system will work like magic. Automatic discovery, automatic network formation, automatic synchronization, persistent and resilient and secure storage with instantaneous sharing regardless of data size. Automatic synchronization and ubiquitous integration via standard protocols and data formats. No need for any other system to use it effectively.

11:08:34 From dsearls : I see the left end here as living in a feudal castle, and the right end as being a free Samurai, a ronin.

11:09:58 From Wendell Baker : @marc, no worries ... the data markets idea seems to inflame emotion in surprising ways. I was fishing to see if ... Something for a garden talk.

11:10:19 From johnnyfromcanada : IMO, decentralization is about control, and distribution is an implementation detail. Orthogonal - i.e., you can have any combination of both (some combinations having less obvious cost-benefit).

11:10:32 From dsearls : Maybe there's a 2x2 here, with centralization-decentralization on one axis and distribution-? on the other axis.

11:11:07 From dsearls : Is there an opposite of distributed, if not centralized? Perhaps aggregated?

11:12:15 From dsearls : Dave, can you take a phone-shot or something that produces a .png or a .jpg of that graphic you just held up? If so, attach it to the session notes.

11:12:19 From johnnyfromcanada : “Centralized” is common for both - ambiguous use of it perpetuates the confusion of the difference.

11:14:01 From Grace Rachmany : Discovery on Distributed Hash Tables seems to be working.

11:17:39 From Grace Rachmany : Biomimicry can be helpful in thinking about how these things happen in complex systems. Expanding our view beyond how it's done in computing architectures opens up additional possibilities.

11:20:47 From Grace Rachmany : In some ways public services need to be built as separate apps that use types of polling and collection rather than tapping into a central servi8ce.

11:23:22 From Elias Strehle : Is it possible to handle ALL communication within the system? What about communication that relates to the system itself (like Bitcoin's Improvement Proposals)?

11:24:20 From Grace Rachmany : There isn't some intrinsic reason it shouldn't be possible within the system.

11:25:24 From dsearls : could be that "distributed" is the wrong word, inherited from Paul Baran in 1964: https://www.researchgate.net/figure/Centralized-decentralized-and-distributed-network-models-by-Paul-Baran-1964-part-of-a_fig1_260480880

11:26:05 From dsearls : It also carries familiar centralized assumptions, such as that a distributor is required for distribution.

11:26:20 From johnnyfromcanada : Dfinity is establishing an Internet Computer, which should eliminate many of such problems, at least from a compute & storage perspective.

11:26:34 From Marc Davis : Language question: doesn’t “user sovereignty” still frame the problem in terms that privilege the system vs. the person? Framing “persons” as “users” seems to imply a power hierarchy that is not truly “sovereign” for persons. So @DavidHuseby, why are you using the term “user sovereignty” rather than “self sovereignty”?

11:28:18 From dsearls : I've never liked "user," though I've always liked "sovereignty" when used with "self." Because that's what each of us are experiencing here, as we talk, and walk, and interact.

11:30:38 From Marc Davis : “Self Sovereignty” assumes the “person” as having rights that exist outside of, and prior to, any particular system.

11:31:05 From dsearls : We are all self-sovereign as independent beings. When we enter a system as a self-sovereign individual, we wear the definition of "user." I get that but I still don't like it. Computing and drugs are the only fields that call people "users."

11:32:15 From MarkL. @smartopian : I have challenged the use of the word User at IIW for over a decade - glad to see the User vs Human discussion happen now - self sovereign is a bit of red herring -

11:32:53 From Marc Davis : That’s why “self sovereignity” is a key concept, because it postulates a “person” as having sovereign rights that exist prior to and outside of being a “user” of any particular “system”. IMHO, this is a key framing issue.

11:33:38 From Timothy Ruff : @Doc, makes sense about "user", and some orgs will have an allergic reaction to the word "sovereign." I spoke with Dave about alternatives, something that conveys a balance of power between orgs and people that's mutually beneficial. Maybe there's a "balance of power pledge" that orgs can publicly agree to...

11:34:00 From dsearls : Self-sovereign comes from Devon Loffreto, who coined it a decade ago and walked off. He still cares but isn't involved. He was contrasting the ideal from the purely administrative. Any system that has an identifier for you in their namespace is administrative.

11:34:39 From dsearls : Hmm... maybe the opposite of distributed is administrative. Just thinking out loud.

11:34:54 From Grace Rachmany : That is accurate. At Holochain we are considering that data needs to be held in 20 hosts in order for it to be fully accessible at any time.

11:35:24 From Grace Rachmany : Also, there isn't really a need for everyone to be online for any give amount of time. People could be off for days or months and get updated when they come back up online.

11:35:46 From Marc Davis : Helpful to think about legal concept of the “person” which can apply to human beings and to corporations/organizations. So perhaps “personal sovereignty” could bridge the gap between humans and corporations each having respective rights and duties.

11:35:59 From dsearls : Agree,Timothy, that some are allergic to "sovereign." But the baby got named. I remember the mainframe world disliking "personal computing," back in the late '70s. it wasn't until IBM made a PC in 1982 that "personal" got legitimized.

11:36:38 From johnnyfromcanada : Perhaps we should distinguish between “coherence” and “cohesion”.

11:37:39 From MarkL. @smartopian : Its litterally self surveillance identity - an this title is something that I think I could trust.. because its transprent. But mis-labelling identity as Soverign in my opinion decreases trustworthiness -

11:38:15 From Timothy Ruff : Great points, Doc. Nothing beats hindsight, where wisdom comes from. Sovereign it is! Now what's the replacement for "user"?

11:39:26 From Timothy Ruff : @MarkL I agree that "sovereign" is inaccurate in many ways, but as Doc says, "the baby got named." Funny, I've got a blog mostly written about how SSI isn't identity and mostly isn't sovereign. :)

11:40:34 From Riaz Zolfonoon : Could we say Consolidated as opposite of Distributed?

11:41:34 From dsearls : Riaz, what Sam said was helpful, but I don't remember it well enough to write down. So hopefully he can point to it here or somewhere.

11:44:49 From Iain Henderson : On terminology, the MyData Community has stabilised on ‘human-centric’, and ‘individual’ and those seem to be being well received across that global community. So there must be decent non-English language equivalents.

11:45:28 From johnnyfromcanada : Coherence is more about lower-level structural integrity and coupling / dependencies. Cohesion is more about high-level semantic meaning / understandability.

11:45:47 From MarkL. @smartopian : Working on human trust and transparency is a bit more difficult when SSI claims to do trust -when it really does assurance. — The Consent Record and Notice an Consent standards are external - and meant for human and sovereign type of interaction - Identity s a digital tool — that is used to surviel an attribute- SSI refers to identity Surveillance tech.. —

11:46:22 From Grace Rachmany : I'll be diving deeper into IPFS over the next month. For now, I can talk about how Holochain is dealing with these issues. Hosting is the one area where decentralization is most difficult for regulagory reasons.

11:48:02 From Sam-Smith : See text file for definition of decentralization vs distribution. Control vs Space

11:55:53 From johnnyfromcanada : Re: earlier concept of how many nodes are needed to keep a coherent network. Related concept of Byzantine Fault Tolerance (BFT). There is an old math proof that says you need to be resilient at minimum against 1/3 of nodes being “corrupted” / inconsistent (intentional or otherwise).

11:56:50 From Grace Rachmany : One of the things that is notable is that it may be necessary to move off of the existing Internet infrastructure altogether.

11:58:21 From dsearls : Sam Curran's Minimum Positive Human Application of SSI is at the same time. A difference might be that my focus won't just be on SSI. Just SS. I'm hoping developer types can make it.

11:59:16 From johnnyfromcanada : The alternative to replacing the Internet is to leverage it such that it cannot corrupt what you are intend. Basically, what DLTs attempt to do, with varying success / correctness.